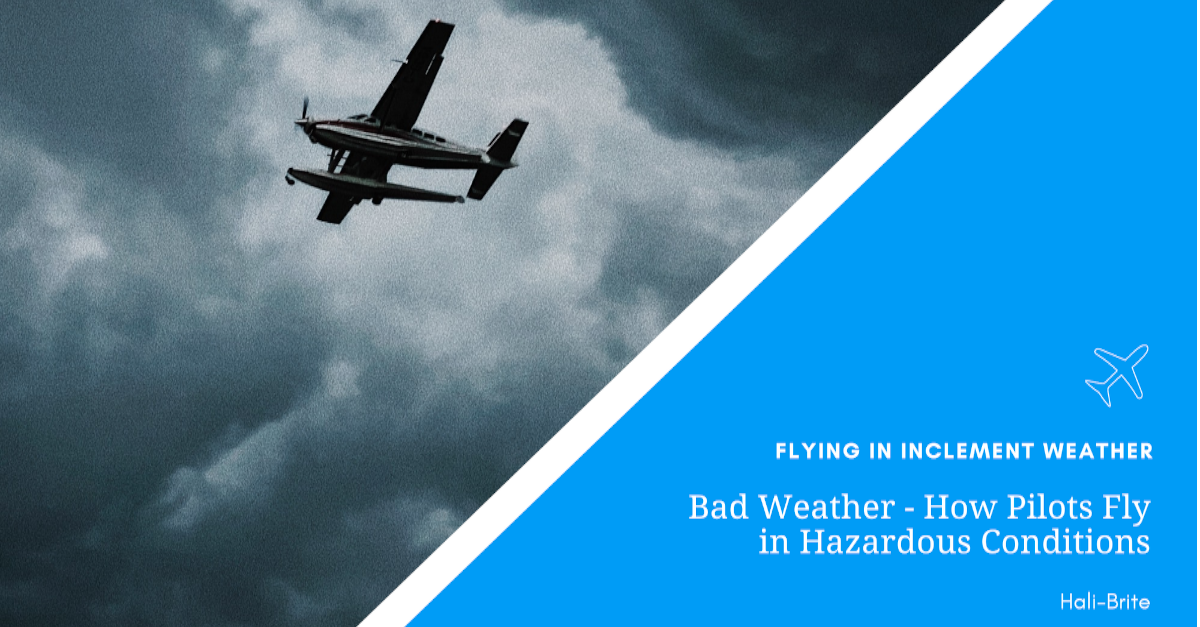 Inclement, or physically severe stormy weather, can be a challenge for pilots, and frightening experience for anxious passengers. However, pilots are trained to take safety precautions in case of bad weather, and planes are designed to endure fierce winds, rain, ice, snow, fog, and even lightning. Whether it’s a commercial airliner or small private plane, pilots have the know-how and objectivity to determine if its safe to fly. So, how do pilots handle flying in different weather conditions?

Rain itself typically isn’t an issue for an airplane, but for the pilots. Heavy rain causes impaired visibility and only experienced pilots with proper instrumentation should be flying in the rain.  Rain can make runways slick, but are no match against an airplane’s tires.  The biggest issue with rain is if it freezes, leading to the next topic, ice.

Ice is hazardous for planes because it changes the shape of the wings. Plane wings are designed to produce low pressure on top and high pressure below, which creates lift. Lift, as defined by NASA’s Glenn Research center, is, “The force that directly opposes the weight of an airplane and holds the airplane in the air.” When lift is disrupted by ice, performance is impaired by increased stall speeds, or reduction in lift. Planes that have ice on the wings are often sprayed with a de-icing chemical whereas anti-icing is sprayed to prevent ice from forming in case of bad weather. Many modern planes are capable of generating heat to melt ice, or use shockwaves to dislodge ice. The outer services of planes are also often designed with water-resistant textiles.

Flying in the snow holds more similarities to flying in the rain than flying in icing conditions. Snow also causes the same visibility issues as rain. Snow isn’t as much of a problem as our next topic.

Like heavy rain, fog causes visibility issues. Pilots are trained to rely on their instruments and not their senses, so they can fly through the clouds. Airfields have low visibility procedures in case of foggy conditions. Taking off and landing in fog is actually easier than taxiing around the runway itself. Usually airports will increase the distance between planes on the runway, which is often why flights are delayed when there’s fog.

Flying in Thunderstorms with Lightning:

Most planes have actually been stricken by lightning, either on the nose or wingtips. Airplane exteriors are designed to distribute electric charges outwardly through a plane’s metal frame, so passengers are safe from lightning since they’re inside of the aircraft, unable to touch the metal.  Even the fuel tanks are protected by thick layers of burn-resistant skin.

Wind causes turbulence, or the violent unsteady movement of air. This is what causes bumpy flights is a least favorite aspect of flying for many passengers. Turbulence can be caused by wind shear, which is the sudden change in wind, storms, which create hot rising air that rocks a plane, jet streams, which change wind speed, and even mountains due to the fact that hot air rises. The easiest way to get injured during turbulence is to not be wearing your seatbelt.

Help your pilots land safely in various weather conditions with Hali-Brite’s airfield lighting and equipment products. From beacons to obstruction lighting, we make the airfields safe.