Home > Blog > The Similarities Between Airport Beacons and Lighthouses

The Similarities Between Airport Beacons and Lighthouses 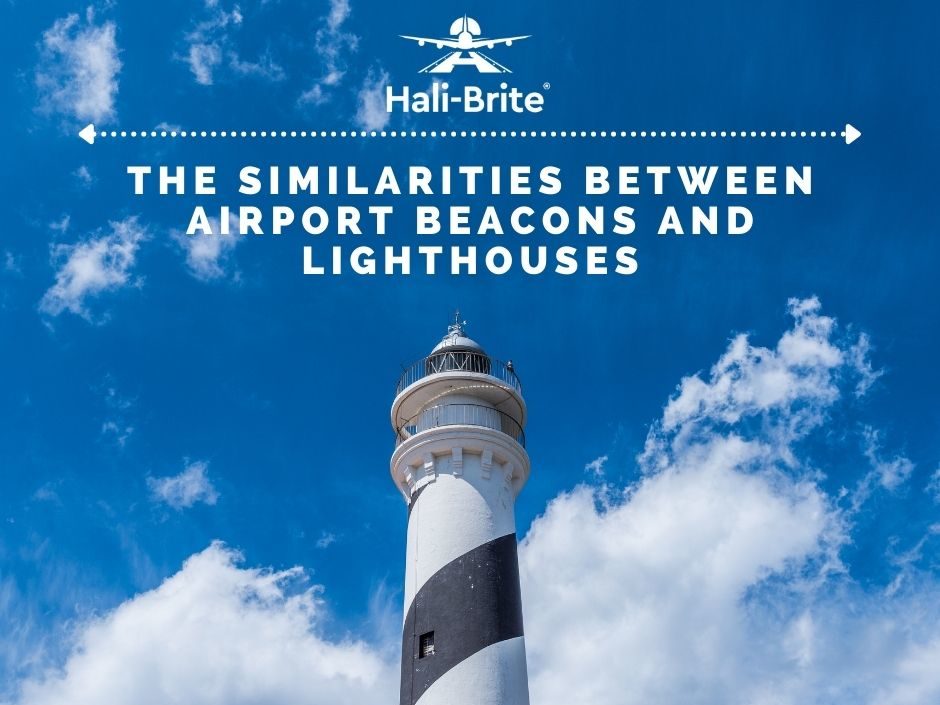 Visual aids are imperative safety measures when it comes to any type of transportation, whether its by car, plane, or boat, which is why airports and lighthouses both utilize the power of rotating beacons. A rotating beacon is a type of visual aid, typically used at night, to notate the location of an airport of lighthouse. Lighthouses, which are also called beacon towers, also warn sailors about shallows, rocky coastlines, sandbars, and reefs. On the other hand, airport rotating beacons that warn pilots about obstacles in the airspace are referred to as obstruction lights or aviation warning lights. So, in what other ways are rotating beacons used at lighthouses and airports similar?

Both airports and lighthouses mount rotating beacons as high as possible, depending on the environment, because the higher the beacon, the farther away it can be seen. You’ll often see shorter lighthouses on cliffs and taller lighthouses near the water itself to ensure that ship captains will see the lights. The tallest lighthouse in the world is the Jeddah Lighthouse in Saudi Arabia, which towers above the sea at 436 feet, or 133 meters. The tallest air traffic control tower in the world is the Tower West at the Bangkok International Airport. Tower West has 33 floors and narrowly beats the Jeddah Lighthouse with a height of 446 feet.

Before Electricity, there was Fire

Before electricity, lighthouses were lit via fire, candles, or lanterns. In 1755, a lighthouse keeper died from a spark of fire igniting the lead roof of the lighthouse, which in turn, became molten and poured over the keeper’s face and into his throat. According to the book, Bonfires to Beacons by Nick Komons, an experiment was performed on February 22, 1921 to prove the practicality of flying at night. This experiment required citizens to light bonfires along pilot James Knight’s route. The flight was successful and lead to the Henderson securing funds for lighting. Thanks to the evolution of technology, now airport lights are controlled by the control tower while all of the lighthouses in the United States, except for the Boston Light, have been automated through the use of machines, remote monitoring, and radio signals.

The Use of Colors

Since airport beacon lights and lighthouses are designed to assist pilots and captains with nighttime visibility, they’re painted in noticeable colors. Airport beacons are typically gloss orange or white. Lighthouses are painted depending on their environment. For example. Lighthouses with red and white stripes are more easily visible when set against a backdrop of rocks. If lighthouses are next to other buildings, they may be painted red, or if they’re close to other lighthouses, the coloring will need to be different so that seafarers make it to the correct harbor. Airport beacon lights also flash different colors depending on the type of airport, while lighthouses will flash red to signify danger, or, again, if they are near another lighthouse will display different flash patterns.

Although not common, airports and lighthouses have been making the move to LED lamps. The Boca Raton Airport in Florida was the first airport in the country to install an LED rotating beacon light. They noted that these lights not only use a quarter of the energy required by traditional halide beacons, but will last a dozen of years before the light needs to be replaced. In 2018, the Scottish lighthouse, Scurdie Ness, was upgraded to LED lighting. They mainly chose to switch to LED to save energy, but benefits also include less servicing, and being grouped together to reduce the likelihood of lamp failure. Switching to LED lights makes sense for both these industries as these kinds of lights last longer, are energy efficient, have high levels of intensity and brightness, and are more reliable.

So, it seems that airport beacons and lighthouses are used in the same way, but in different locations. As simple as they seem, they’re extremely powerful as visual aids. These beacons safely guide pilots and sailors to their destinations. Rotating beacons continuously evolve along with technology, but will always be readily visible to lead the way home.