Home > Blog > What Is a Vertiport: Everything You Need to Know

What Is a Vertiport: Everything You Need to Know 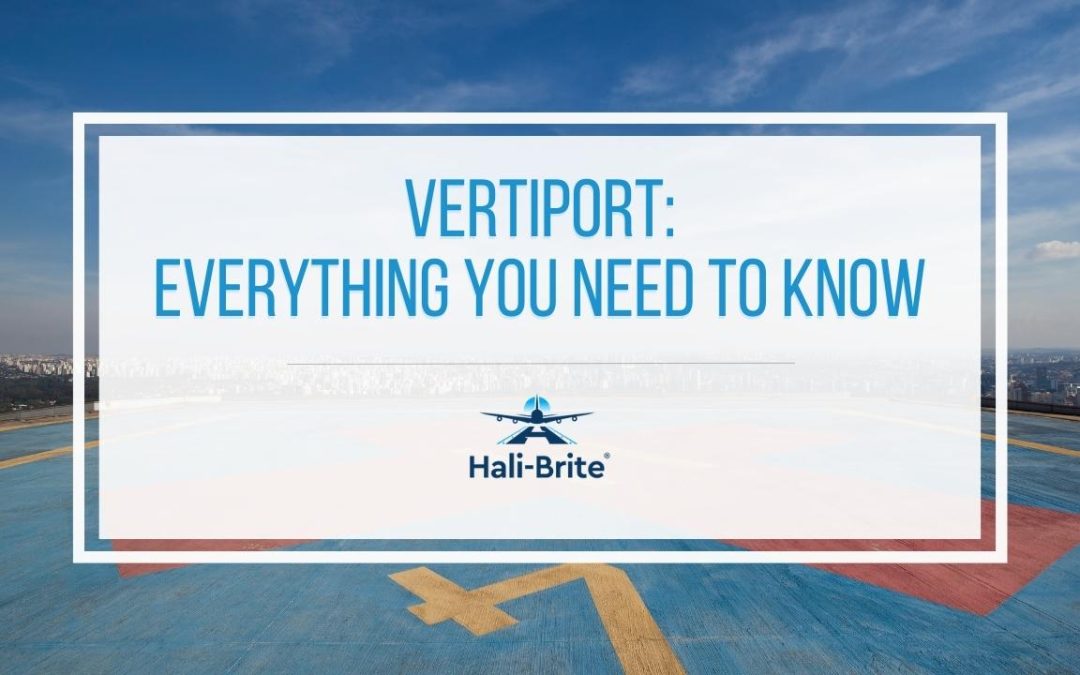 Several aerospace companies are gearing up toward Urban Air Mobility (UAM), also known as Advanced Air Mobility (AAM). UAM/AAM is a revolutionary air transportation system that transports passengers and freight from one location to another using an electric vertical take-off and landing (eVTOL) aircraft.

With the recent development of the UAM/AAM, an appropriate take-off and landing area will be needed to proceed with the eVTOL aircraft operations. A vertiport is a defined area that can support the landing and take-off of eVTOL aircrafts during flight operations.

In this article, you’ll learn more about vertiports and why it is vital in the future of air transportation.

Rotorcraft. A rotorcraft, also known as rotor wing aircraft, is an air vehicle that utilizes spinning rotor blades to lift off. One typical example of rotorcraft is a helicopter. A helicopter’s spinning blades generate an upward thrust that allows vertical take-off and landing. The helicopter slightly tilts as it hovers, creating horizontal thrust to move forward.

Power-lift Aircraft. A power-lift aircraft, like a rotorcraft, can take off and land vertically. This type of aircraft utilizes a fixed-wing design similar to a conventional airplane. A tiltrotor aircraft is a power-lift aircraft with a pair of tilting rotors attached to the end of a fixed-wing. The rotors are angled horizontally during vertical take-off and landing, providing vertical thrust. As the aircraft hovers, the rotors are inclined vertically to generate a forward thrust.

Electric Vertical Take-off and Landing (eVTOL) aircrafts are battery-powered vehicles with the ability to hover and perform vertical takeoff and landing. The equipped battery pack enables the rotors to run without consuming fuel, providing the benefit of reducing their carbon footprint. In addition, eVTOL aircraft feature a charging system that allows battery recharging using electricity grids, similar to other electric vehicles. 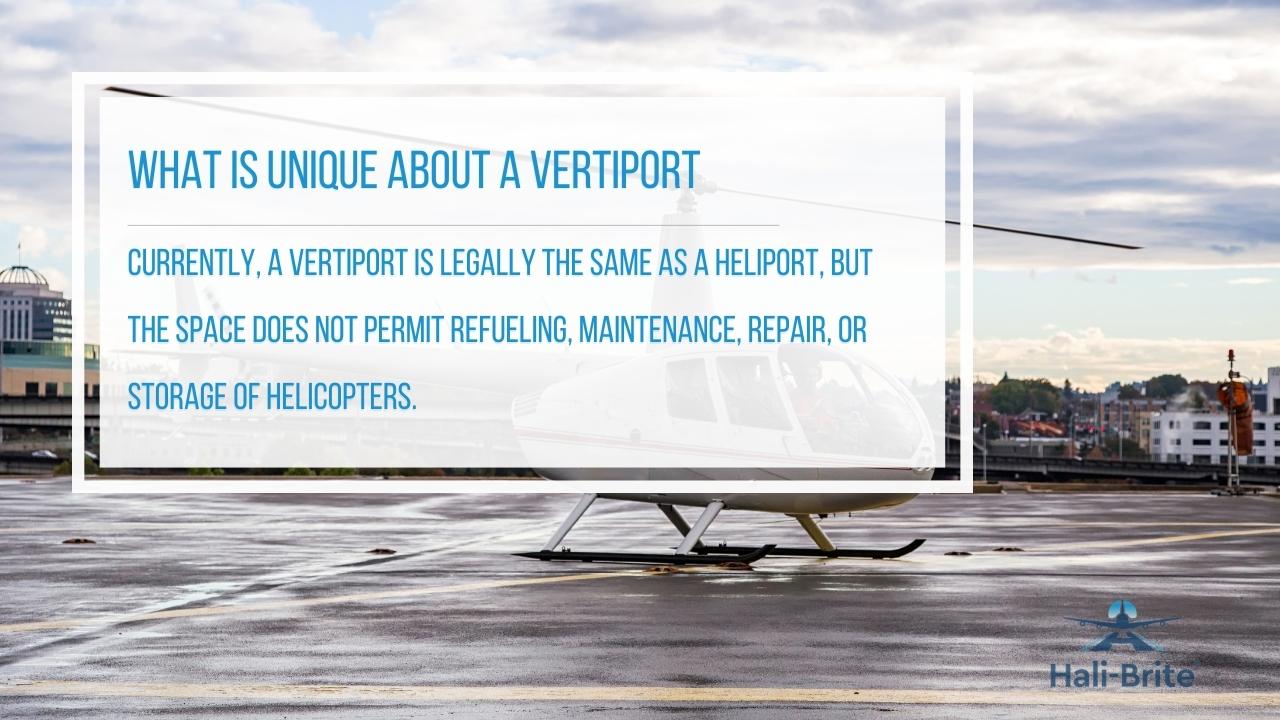 Heliports are take-off and landing areas for helicopters. Similar to airports, a heliport has terminals and maintenance facilities. Furthermore, heliports strictly adhere to the Federal Aviation Administration (FAA) regulations, which include standard marking and lighting designs.

On the other hand, a vertiport is a designated area that supports take-off and landing operations of eVTOL aircrafts. FAA has provided specifications on the standard design of a vertiport. The guidelines specified, though, are subject to updates as new information and analysis on eVTOL aircraft operations become more available. The design of a vertiport has similar infrastructural elements to a heliport, including a touchdown and lift-off (TLOF) area, a final approach and take-off (FATO) area, and visual aids.

Vertiports in the United States

Although some sites in the US go by the name “vertiport,” including the Dallas Vertiport and Vertiport Chicago, they are identified as heliports. The guidelines and specifications for vertiports released by the FAA are still incomplete due to insufficient data for eVTOL operations. Fully operational vertiports are currently nonexistent both in the US and abroad. Heliports and airports continue to serve as eVTOL flight operation test sites.

Several aviation companies are developing unique vertiports concepts independent from heliports and airports, and their construction is ongoing. For instance, Singapore is actively developing VoloPort, a potential vertiport concept from German aviation firm Volocopter in partnership with Skyports. Additionally, the first US vertiport hub will be constructed in Lake Nona, Orlando, Florida, by the German aviation firm Lilium in collaboration with Tavistock Development Company. These vertiports are geared to support UAM/AAM operations.

The Future of Vertiports

For UAM/AAM operations, two different transportation models are currently being explored. The first model utilizes vertistops for easy mobility on short routes. A vertistop is a take-off and landing area for a single eVTOL mainly used for customer pick-up and drop-off, which can be located on existing infrastructures like buildings. The other transportation model, which uses vertiports, is intended for longer eVTOL aircraft flights. A vertiport consists of multiple landing and take-off sites for eVTOL aircraft. Furthermore, vertiports are equipped with the necessary maintenance and charging facilities for eVTOL aircraft to operate effectively.

Vertiports are vital in the execution of the UAM/AAM concept. The FAA has provided a standard vertiport design as guidance for vertiport operators. The vertiport design includes the required safety markings and lighting aids, enabling eVTOL aircraft to identify vertiport locations, especially during night operations. The specified vertiport lighting system has the same equipment utilized in heliports, such as elevated lights, identification beacons, and wind cones. You can get these lighting aids here at Hali-Brite. We ensure that our lighting equipment complies with FAA requirements. Contact us here today!