Here, you will know why an airport closes some of its runways, the standard markings we use, and their functions. The article also discusses the importance of having lighted runway closure X (crosses) on closed airport runways.

Why Do Runways Close?

Aircrafts use runways for landing and take-off operations. However, a runway can be permanently or temporarily closed for safety reasons. Here are some of the reasons for airport runway closures:

Airport construction activities can result in partial runway closure or displacement of the runway threshold. A portion of the runway pavement will be unavailable during partial runway closure for take-off and landing operations. As an alternative, the pavement portion behind the displaced threshold can be utilized as a take-off and landing area. An aircraft can only land from the opposing direction in these situations.

What Are Airport Markings?

Airport markings are useful information that aids pilots during landing, take-off, and taxiing. The Federal Aviation Administration (FAA) has established a uniform standard for airport markings, allowing pilots to recognize markings from one airport to another. Airport markings can be categorized as follows:

A runway is the take-off and landing surface of an aircraft. A runway can be classified as either:

Runway Centerline Markings. A runway centerline is a white line of uniformly spaced stripes and gaps, indicating the airport runway’s center that serves as a guide during landing and take-off.

Runway Designation Markings. Runway designations are white letters or numbers painted on the runway. A runway number represents the runway centerline’s compass heading measured clockwise from the magnetic north direction. On the other hand, runway letters are used to differentiate parallel runways, designated as letters L and R for two parallel runways and L, C, and R for three parallel runways.

Runway Threshold Markings. Runway threshold markings consist of white stripes with the same dimensions that indicate the runway area where an aircraft can begin its landing operation. The number of stripes varies with the runway width. For instance, a 100-feet runway width has eight stripes, while a runway with 200-feet width has 16 stripes.

Permanently Closed Runways and Taxiways. A yellow cross is marked at the end of each permanently closed runway or taxiway. Furthermore, all other markings are removed, such as runway threshold, designation, and others. 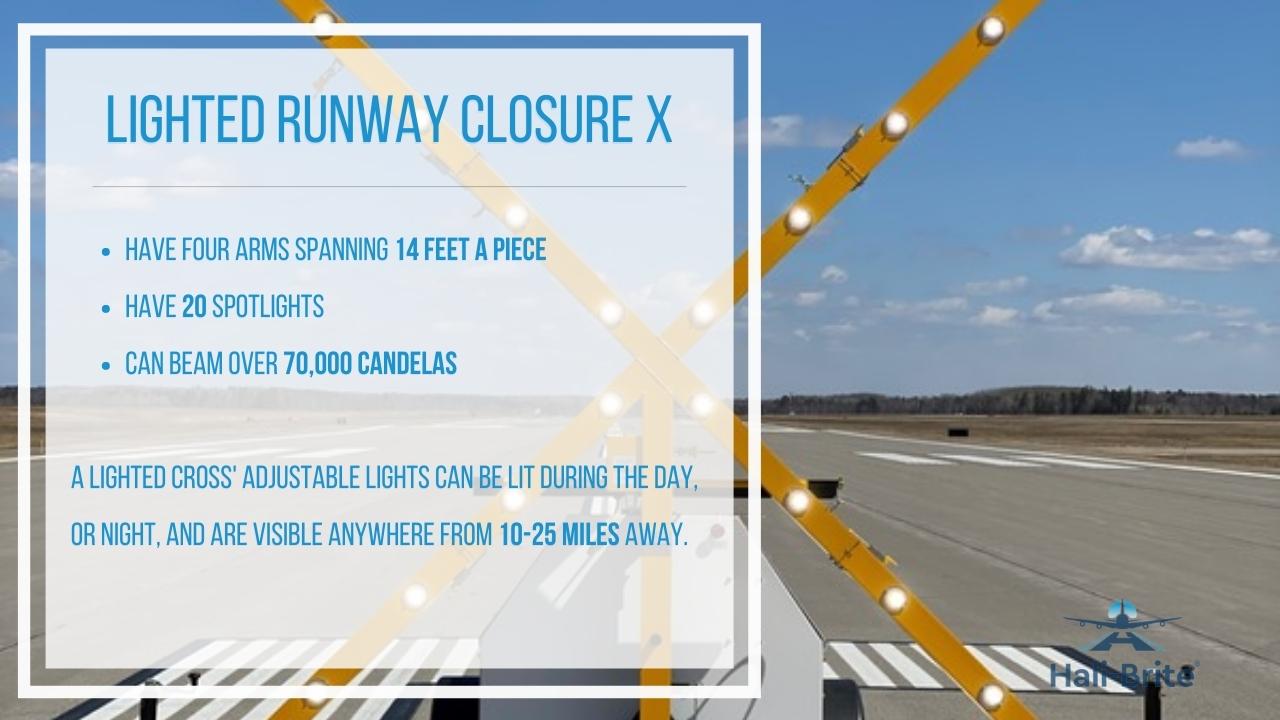 Lighted closure crosses can aid pilots during aircraft navigations. A lighted runway closure X ensures that pilots can readily recognize an airport runway closure, allowing them to avoid landing on a closed runway. Furthermore, the illumination from the lighted cross provides pilots with clear visuals of runway closure markings, especially during night flight operations or conditions with poor visibility.

Make Your Airport Safer With Hali-Brite

A lighted visual aid that indicates an airport runway closure must comply with the FAA standards. We at Halibrite can provide you with FAA-certified LED Portable Lighted Runway Closure Marker that can be installed during airport runway closures. You can contact us here so we can assist you in buying one.